From April 5th to 7th Ben Erdmann, Jess Roskelley and I climbed a new route on the Citadel in the Kichatna Range, Alaska. You can find a slide show from the trip HERE. 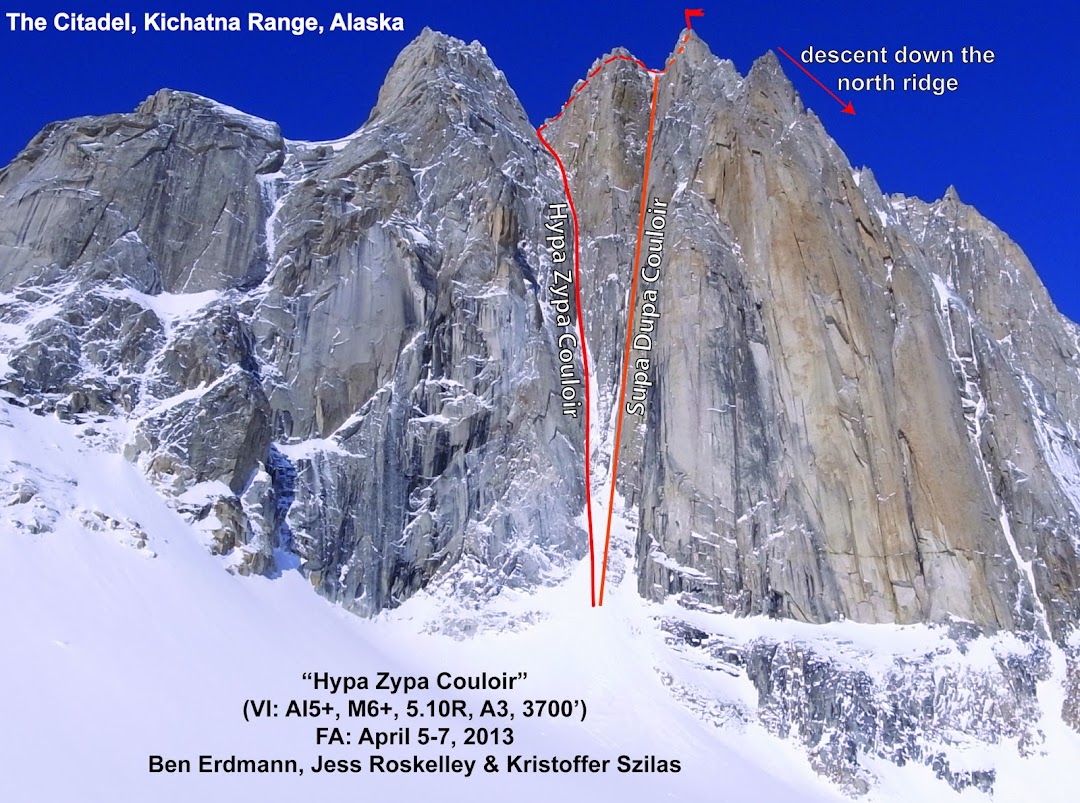 Our new line follows a series of ice runnels to the left of the ‘Supa Dupa Couloir’ established in 2003 by Mike ‘Twid’ Turner, Stu McAleese and Olly Sanders. Our initial plan was simply to repeat the ‘Supa Dupa’. However, Twid mentioned the possibility of a potential new line to the left of it when we e-mailed him about beta for the Kichatnas.

Paul Roderick of Talkeetna Air Taxi dropped us off at the base of the east face of the Citadel around noon on April 4th and after a quick inspection of the route we were convinced that we should go all in on the line to the left of ‘Supa Dupa’. We began the climb just after midnight less than 12 hours after landing on the glacier.

Initial snow and ice pitches in the couloir led up to a very steep corner with difficulties of AI5+ and M6+. Jess was the ropegun on these pitches. At sunset we chopped a ledge on a 60 degree ice slope and suffered through a sitting bivy in the cold Alaskan night. We had brought a small tent, but it did not fit our ledge and collapsed on us during the night. Early the next day we arrived at the col, which marks the end of the couloir. From there Ben led several pure rock pitches on the relatively warm south ridge. The first pitch off the col was steep A3. He then climbed the 5.10R crux without gloves and crampons, which was a full 60 meter pitch. We reached the summit ridge that evening, but bivied only a stones through from the actual summit on the east side of the ridge. We once again settled in for a sitting bivy on a chopped ice ledge. After a very uncomfortable night we rappelled down a gap on the west face, which took us to an easy snow ramp that lead directly to the summit. The summit itself consisted of two large granite blocks about five meters high, which from a distance looked unclimbable. Fortunately there was an easy way up on their back side. After a short brew stop, we then faced an arduous descent down the north ridge where our rappel lines got stuck several time, and we had lots of exposed down climbing and also had to rappel off our only two snowstakes. In the last rays of the sun we did one final rappel off a spectre-hook, which was hammered less than 3 cm into an icy crack, but even scarier it was flexing under bodyweight. However, it got us over the bergschrund with one meter of rope to spare and we reached the safety of the flat glacier terrain. We stumbled back into our base camp 70 hours after having left it.

We jokingly named our new route the ‘Hypa Zypa Couloir’ in keeping with the name of the ‘Supa Dupa’. That way the Super and Hyper couloirs of the Kichatnas are located side by side unlike in the Alps. The overall difficulty of our route is American commitment grade VI corresponding to European ‘ED+’ with technical pitches of AI5+, M6+, 5.10R, A3 and a vertical height of 3700 feet (ca. 1100 meters).

For comparison the 'Supa Dupa Couloir' was given an overall grade of ED4 and the first ascentionists were able to rappel their line. We ruled out the option of descending our line at the col due to the very compact and featureless nature of the rock and the lack of good water ice for alabakov anchors. Therefore it would be an understatement to say that we were committed on the 'Hypa Zypa Couloir'. The ED-grade could be followed by any number as that system is not particularily well constrained, so the '+' is up to the second ascent team to define. 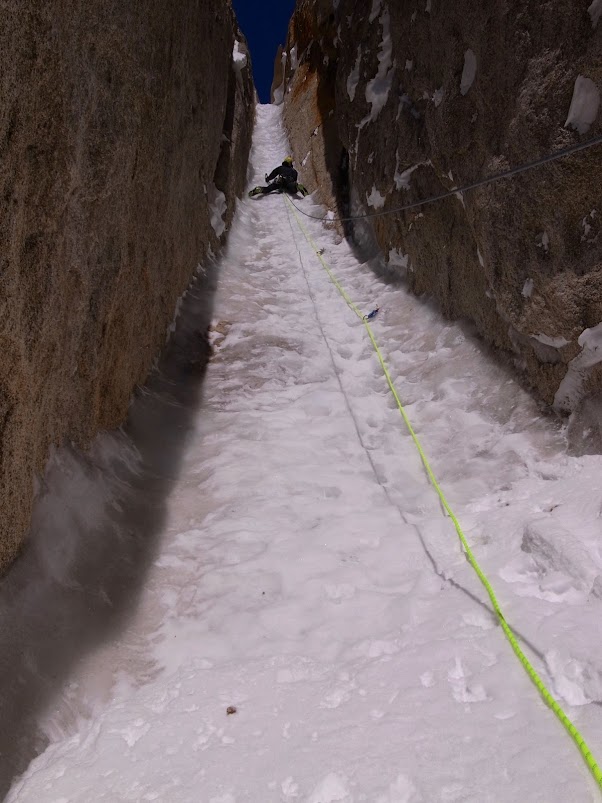 Jess on the ice crux 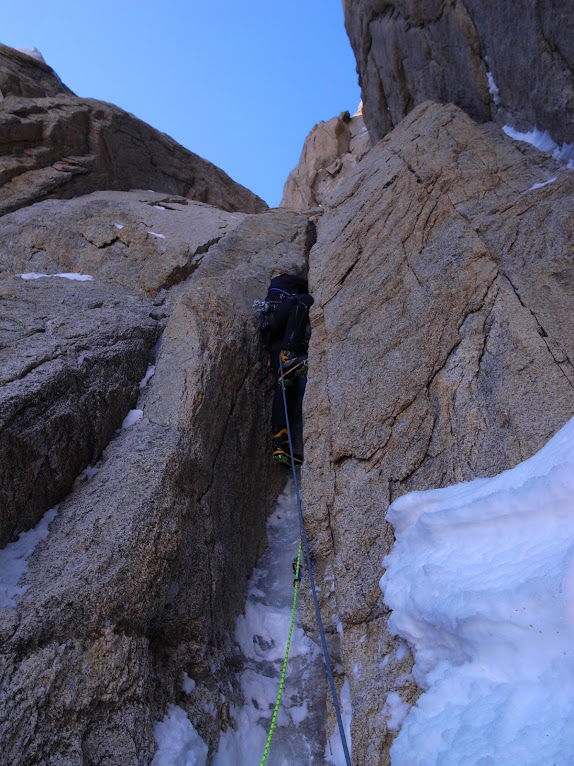 Jess on the mixed crux 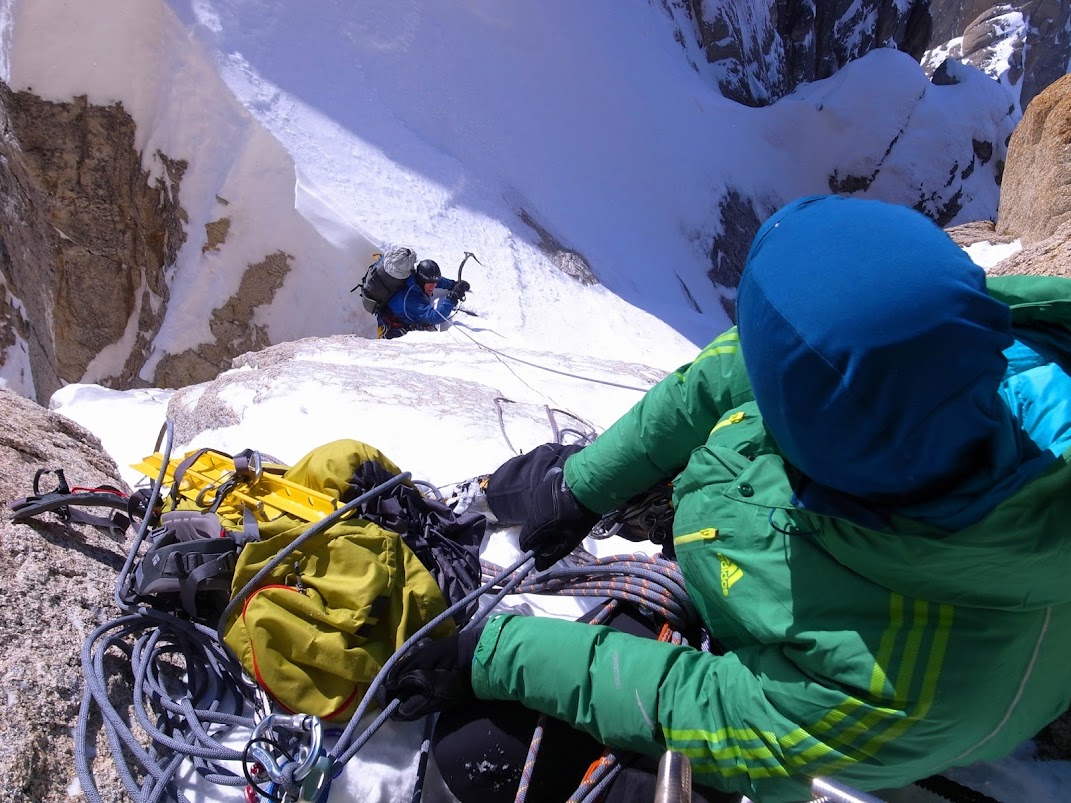 The col at the end of the couloir 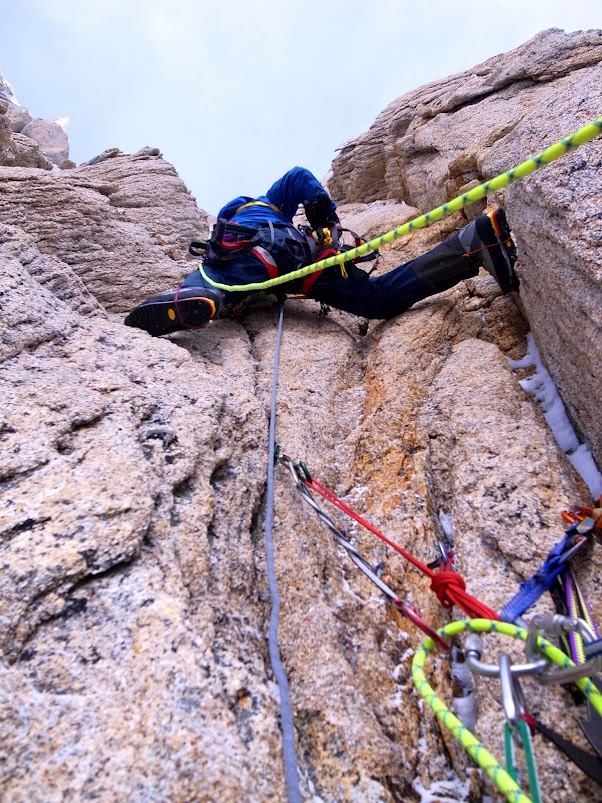 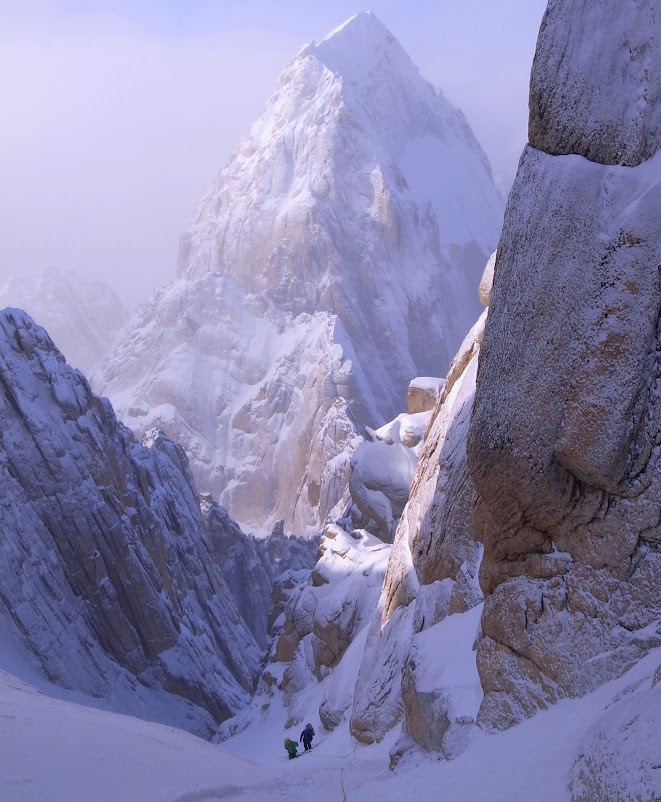 On the slope to the summit 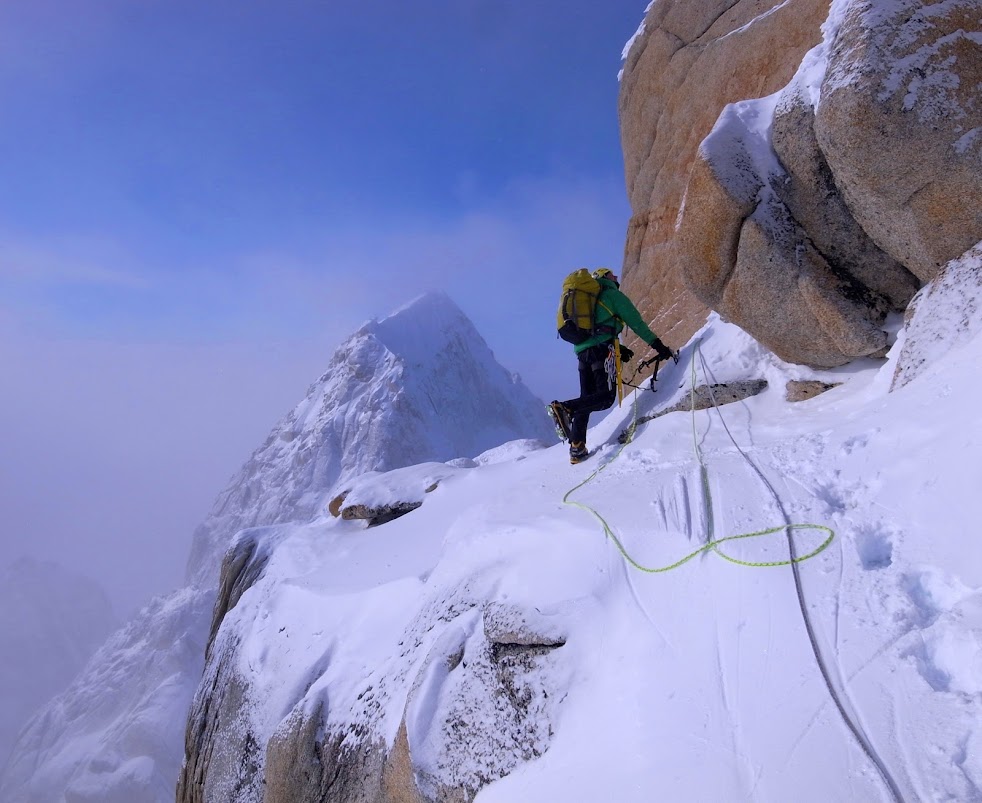 One pitch from the summit of the Citadel 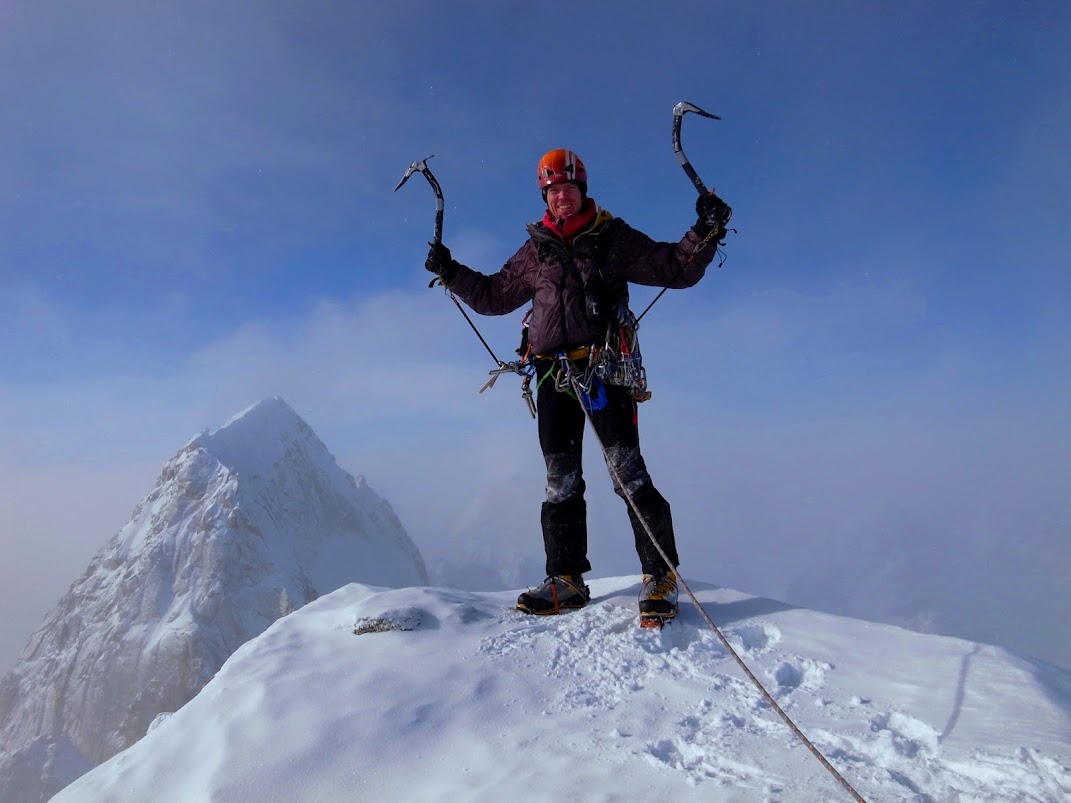 Myself on the summit of the Citadel 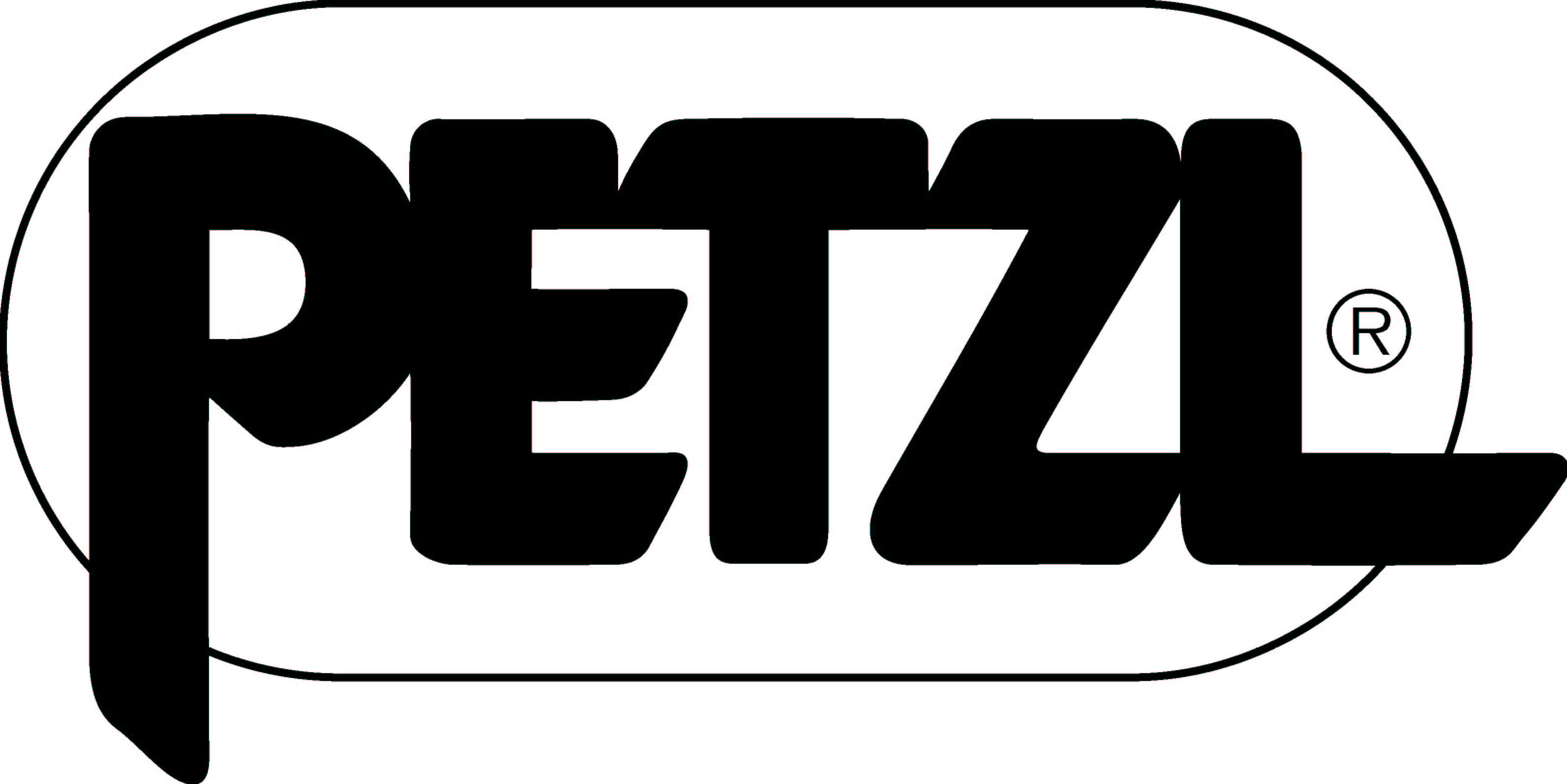